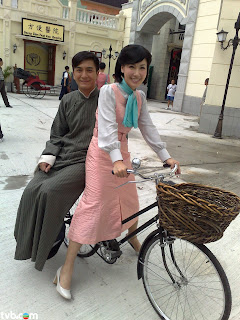 The guys were playing rock-paper-scissors to see who was going to buy treats. In the end, Kevin Cheng lost.

In the new series "Iron Horse Seeking Bridge", there is a scene where I have to drive Kenneth Ma home because he was ill. Actually, it is already very difficult to ride a bike on set, and to drive a 150 lb, person, I can't even control the bike handle!! After a few attempts, I was very lucky and was able to complete it. However, it was very shaky!! I approximately crashed four times!! But our filming crew was very incredible because they were riding and filming right behind us. Plus, the weather was super, super hot!!

Personal Note: Just when I was complaining about Selena not having any pictures on her filming! Ha ha.... They are super cute together!