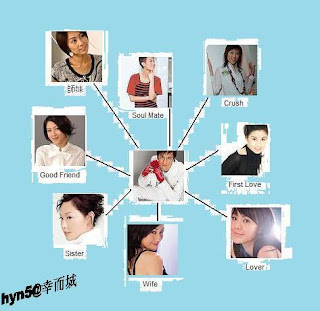 I have constructed a relationship tree for the female artistes who have worked with Ma Ming the most or have the most chemistry with. The identity is given to the girls according to my feelings toward their cooperation.

Out of the eight girls on here, Ma Ming has taken four of the girls' first onscreen kiss, and Sharon's first onscreen kiss went to Ma Ming in "Dream of Colours". Although Sharon has worked with Ma Ming in three series, they seem more like friends than a couple. Her best pairing would have to be Ma Ming though.

Ma Ming and Nancy have this 師兄師妹 look. In "Strictly Come Dancing II", they both learned dance routines together and gave each other support throughout the rounds. The dance instructors at the time seemed to have been their master of training. They would be perfect to play these roles in an ancient series together.

Cherie's first onscreen kiss with a guy went to Ma Ming in "Love Guaranteed". The couple had a lot of chemistry in the two series they worked together in. In SP, Ma Ming had a crush on her, while in LG, Cherie had a crush on him. Even though they ended up in both series, the word 'crush' is where it all started from.

Kate was the third girl who give her first onscreen kiss to Ma Ming in "La Femme Desperado". Within a year's time frame, Kate and Ma Ming filmed three series back-to-back. However, "Man in Charge" is yet to be aired. Kate has been related to Ma Ming in all of their series together. She has been his girlfriend, sister, wife, lover, and even sort of an enemy and sister-in-law in "The Four". To me, Ma Ming and Kate's outer appearance seem like brother and sister more than anything else.

There is a sweetness to their coupling that reminds me of puppy love. They match perfectly, and Bernice definitely has a lot of chemistry with Ma Ming.

Ma Ming and Myolie seem to be predestined to work with each other. They both entered the business in 1999, worked in eight series together (but only paired up once), and even went dancing together. How much more fate do you expect? She would be classified as Ma Ming's soul mate.

There were, without a doubt, sparks flying in the air for MK Sun and Lily Suen in "Survivor's Law II". Ma Ming and Ella had a ton of chemistry, and they were a perfectly matched couple. On top of that, they were sweet and funny. Their characters were written to perfection for another.

Selena Li - Wife
Collaboration: "The Herbalist's Manuel", "The Master of Tai Chi", "To Grow with Love", "Survivor's Law II", and "The Four".

Selena's personality and character are very suited to be classified as Ma Ming's wife because she is very innocent and pure. Selena happens to be the fourth girl who gave her first onscreen kiss to Ma Ming. Judging from their outer appearance, many people didn't expect a good coupling out of them (not me because I've already liked them together in "The Herbalist's Manuel"), but that is the magic of it. All of the sparks and magic happen when it is least expected. Iron Fist and Lam Yeuk Fei are super, super sweet in "The Four". They have a great amount of chemistry after working together in five series. Also, Selena was supposed to go dancing (Nancy Wu replaced her), but was pulled out because of the filming of "When Easterly Showers Fall on the Sunny West". In Selena's words commenting on what kind of roles they have played, "(In series) I like him, he likes me, we both like each other, and we get married and have kids".
Posted by hyn5 at 3:30 PM