The Making of "My Ages Apart"

*Credits to reiakiryu
Posted by hyn5 at 7:00 AM No comments:

*Credits to TVBUSAofficial and 星夢娛樂
Posted by hyn5 at 12:00 PM 1 comment:

The Making of "Flying Tiger"

*Credits to LovingTBB
Posted by hyn5 at 10:00 PM No comments:

Personal Note: Wow...Ali has already received 'Favourite Actress' after just being the 'Most Improved' last year!

So many pork 'Character' awards....


Kenneth Ma: "The producer looked for me to guest-star. If 'Line Walker III' films, Victor's younger brother, which is me, getting revenge would be the main underplot". It seems that the scriptwriter has something for the future, using this scene to pave the way for a third installment, and still having an opportunity to continue to 'guess who is an undercover'. However, Kenneth has not heard about him originally being the character 'Lok Siu', but since there is this underplot, he really hopes that the third installment is brought to fruition. The reason is not only being a major villain but also: "Because this series is a collaboration with Tencent, in addition to more people watching, the production fee would also be more, and able to do even more attractive scenes".


*Credits to LovingTBB
Posted by hyn5 at 9:00 PM No comments: 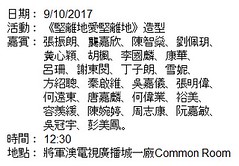 - The series mainly wants to talk about the communication among people. A lot of the time, the younger generation feels that the previous generation's ideas are really detached from reality, and the previous generation also feels that this generation of people is really detached from reality. However, the series hopes that every generation loves one another so that there is less conflict and more love and tolerance.
- The entire series will be packaged with techtronics, which is the industry of innovation and technology, and will mainly be location filming at the Science Park.
- Owen Cheung will play Ting Sun Hei (丁信希), a computer homebody who likes to play video games. He does not like being touched by people, and he reacts upon being touched. He meets Katy Kung after joining the techtronics company started up by her and Jason Chan. He is also called 「希神」.
- Katy will play Wong Chi Fei (王子菲), an IT startup CEO. She is a rich second generation and is rather detached from reality. She does not care whether the company makes money, and she is also not calculative about life issues. She is a tomboy who likes engineering things. She even hopes to be able to use technology to change people's lives, so she encounters many difficulties on her path to starting a business. Owen will assist her on the side, accompanying her in going toward her dream. The two will go from being a bickering pair to appreciating one another, and even becoming a couple in the end.
- Jason is responsible for managing the company. To maintain the company, he would make choices that others believe to not be good ones. He is a bad guy. He is initially with Moon Lau, and Jacqueline Wong likes him. In between, he has some bed scenes with Lisa Ch'ng. In the end, he also has a romantic storyline with Katy.
- Moon does volunteer work and is a nurse, so she is gentle and likes to help people. She does not really use social networking sites, but because she works as a volunteer at the Science Park, she meets Jason, Owen, et al., even being romantically entangled with them. Her boyfriend is Jason, and she will appear as Wonder Woman and a goddess in Owen's imagination. She is a goddess-level character.
- Jacqueline will play Ting Sun Yan (丁信恩), a KOL. She has a straightforward personality, is crude, and is more like a Hong Kong girl. She is very driven, as she works part-time at a maid café and is also a flirtatious part-time girlfriend who accepts money when she is touched, but it is not to the point of prostitution; however, it was not by choice, as her friend, who is a part-time girlfriend, was busy, so she substituted for her. She has to dance in a maid's outfit. Bowie Wu is her maternal grandfather.
- Lee Kwok Lun is from a wealthy family. Whatever he says goes; he is strict toward his children, Katy and Brian Tse.
- Akina Hong is from a wealthy family.
- Brian will play Wong Chi Pok (王子博), a rich guy who feels inferior and does not have enough confidence. He is an antagonist. He Katy's elder twin brother.
- Karl Ting will play a video game expert. He is a dispirited youth who does no decent work and only wants to play video games, so he has conflict with his mother (played by Rosanne Lui). He and Owen are brothers.
- Milkson Fong will play Rico, an IT nerd. He is also called 「葡萄L」.
- Chun Kai Wai is from a wealthy family.
- Aaryn Cheung will play Ko Kin Bor (高健波), an IT nerd. He is a fan of girl groups. He is also called 「AK仔」.
- Ho Yuen Tung will play 「奇異果博士」, an IT nerd.
- Kevin Tong will play 「街霸強」, an IT nerd. He is the king of trendy phrases.
- Fion Yung is from a wealthy family.
- Hebe Chan will play a KOL who loves money. To increase her popularity, she becomes a waitress at a maid café, becoming a flirtatious maid.
- Daniel Chau will play a disabled person. He and Moon have a miscalculated fate.
- Ku Ming Wah will play Tsui Yi Fei (徐懿蜚), a person who only dreams about becoming a celebrity and does not care about his wife and children.
- Sophie Yip will play Joey.

Katy playing a twin again after being James Ng's elder twin sister in the second installment of "Come Home Love"....

Personal Note: Would have made so much more sense to interview Ada and Lawrence Ng together.... Ada and Moses don't even have any memorable collaborations in which they were partnered up, so it seemed like two separate interviews.
Posted by hyn5 at 9:30 AM No comments:

"The Taxorcist Sidequel - Chapter One" Trailer 2

Personal Note: The show seemed more like a sales presentation, with variety programmes and big big channel offerings being greatly highlighted this year.

Of the anniversary series' performance segments, liked the musical for "The Exorcist's Meter" the most. Elena and Jacquelin's dance performance was so random, and the trailer and the interview portion of "My Ages Apart" were also lacking and not particularly informative.