On the fifth day of Kelly Chen's nine-day concert, she invited two special guests, her two sons, 'Shrimp Dumpling Boy' Chace and 'Xiaolongbao' Riley. Kelly was holding Chace with one hand and Riley with the other, while singing the classic song 《星夢情真》.

Kelly even told her two sons to greet their father, Alex, who was in the audience, and passed the microphone over to them to say 'Merry Christmas' to the fans. Riley even did a cute face by sticking out his tongue upon request, making the audience applaud.

In the end, Chace and Riley held onto their mother, almost unwilling to leave the stage. Kelly immediately said, "Being a mother is really not simple...even more difficult than being a singer". She even told the audience to grasp the opportunity to take pictures for them: "Take more...very rare to have this opportunity". Because Kelly has been busy with her show, the child care responsibilities have been handed over to her husband, even encouraging him by saying, "Just a few days left. Endure it, okay?"

Queen Kelly Chen held a nine-day concert at the Hong Kong Coliseum. Tonight was the final show. After a clip of her announcing her marriage on stage in 2008 was finished showing, she rose onto the stage, with one hand holding eldest son Chace and the other holding youngest son Riley, singing 《星夢情真》. Chace was waving the glow stick in his hand; afterward, Kelly immediately pointed toward her husband, who was in the audience, telling her two sons to look at their father.

Afterward, Kelly squatted down to whisper in Chace's ear, and then he said to everyone, "Happy New Year, everybody!" Afterward, Kelly whispered in Riley's ear, but the playful Riley constantly spoke baby alien language. No one could understand it, so it was extremely funny. Then, Riley left. Before leaving, Chace said to Kelly, "I miss you, Mom", and even blew Kelly a kiss. After seeing this, Riley, who had already left, immediately copied him, going back say the same words to Kelly before leaving the stage.

Regarding this, Kelly could not help but laughingly say, "He cannot lose. Whatever big brother does, he would follow along, but they are both incredible. Usually, they go to sleep at eight something, but they endured until now. Haven't seen [everyone] for a few years...I made these two dim sums. Today is the last show. Can see them when I get home".

*Credits to tvb, LovingTBB, and TVBUSAofficial
Posted by hyn5 at 9:30 AM No comments:

*Credits to LovingTBB
Posted by hyn5 at 9:00 AM No comments: 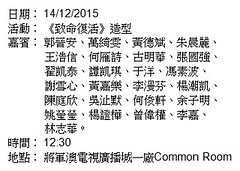 - 28 episodes long.
- In late-March, there will be location filming in Vietnam for three weeks.
- The series wants to bring out that everyone is able to 'resurrect'. Some people feel that they are already done for, but people should not only look at the past; they should look forward and think about what they want to do. In the series, everyone experiences this phase; it is only when they untangle the knot in their hearts that they are able to really resurrect again.
- The series talks about being active and how people survive.
- Roger Kwok was kidnapped in Vietnam and has been missing for ten years. He has been legally declared dead, and his assets have already been distributed. Legally, he is already a dead person, so he and wife Joey Meng are automatically divorced. After he escapes from Vietnam, he does not even have ID. He is able to get his identity back, but he can no longer get his assets back, nor his wife who has remarried. After returning, he wants to get back everything that originally belonged to him, but he discovers that this is not right. For many things, if it is lost, it is lost. Afterward, he begins to think about what true 'resurrection' is.
- Roger's kidnapping and disappearance are a mystery. After getting kidnapped, he was kept in a criminal syndicate's underground prison. In the end, even the person who imprisoned him dies. In order to survive, he must rely on himself to live on. Oscar Li also helped him a lot. Roger always thought that his kidnapping was only an accident, but he slowly discovers that it was not an accident, as it was done by man. After discovering this, he begins to want to get revenge.
- Roger and Vincent Wong are master and apprentice. After getting kidnapped, their fates became different: Roger wandered around a desert island for ten years, while Vincent returned to Hong Kong. However, the two both develop post-traumatic stress disorder (PTSD), thereby becoming crazy in personality.
- Roger is a person who does not easily tell people, 'I have a problem', so he suppresses himself. On the surface, he can accept that he has lost all of his assets and his wife, but he subconsciously has resentment and anger. Slowly, he lives with this burden. He has a barbaric look for the first few episodes, and then there will be some recollection scenes with that look.
- Joey will play Roger's ex-wife.
- Kenny Wong will play a private investigator. When he was in Vietnam, he was an ex-serviceman. He is a disabled person. Back then, when Roger was kidnapped, he got shot while saving him. He and Joey are both Vietnamese Chinese; after going through the Vietnam War, both of their parents passed away, and they meet at an orphanage. He has always taken care of her; in the end, they separated, and many things happened in between. Joey and Roger got married; although he gave his blessings to the two of them, he was slightly uncomfortable in his heart. Afterward, Roger has been missing for such a long time, and Joey has given up on Roger, so the two finally get together. However, the story is certainly not that simple; he did some things, causing the two to be able to get together.
- Rebecca Zhu will play a career woman in the business world who has her own thoughts. She is Roger's superior. She is, following Joey, another important woman in Roger's life, but she has some secret background that is related to Roger.
- Vincent will play Max Hong Sing Chit (康成哲), Susan Tse's illegitimate son. He and Roger were both kidnapped ten years ago, but due to Roger's rescue, he escaped and left Roger behind, causing him to have PTSD, along with guilt and self-blame, so he plays X games and intense sports, such as rock climbing and jumping off a cliff, to numb the fear. When Roger appears again, he would help him without asking. He, Zoie Tam, and Stephanie Ho have a triangular relationship.
- Stephanie has a one-sided love for Vincent.
- Zoie will play an employee at Roger's previous company. She is rather career-oriented and does whatever it takes to reach a certain position. She is not considered evil, as she is simply slightly aggressive. She was an outstanding student who excelled in her studies, so she feels that she also excels at work; however, she encounters some setbacks at work. She has a romantic storyline with Vincent.
- Stephen Wong will play Hong Sing Yin (康成賢).
- Fanny Lee will play Ku Ming Wah's wife. She is the sister-in-law of Joey and Roger.
- Toby Chan will play Roger's mistress. It was because of her that Roger went to Vietnam. In the end, the two both get kidnapped, and she loses her life.
- Ho Chun Hin will play a Vietnamese Chinese.

Personal Note: Interesting premise, though not sure about the execution, especially with TVB scripts nowadays....

Rebecca looks much older with this hairstyle.

Most Improved Male Artiste
Tony Hung ("Eye in the Sky", "Every Step You Take", "Captain of Destiny", "World's Great Parties", "Not Far but Away")

Most Popular Classic Series
"The Greed of Man"

*Credits to 娛樂最前線e-news and wenweipo
Posted by hyn5 at 8:30 AM No comments:

Katy Kung on "The Green Room"

Akina Hong on "The Green Room"

*Credits to 娛樂最前線e-news
Posted by hyn5 at 9:30 AM No comments: