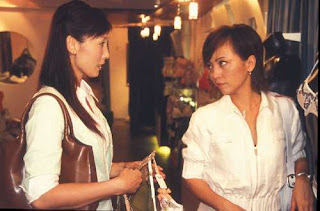 Sheren Tang is the role model for modern woman

After the success of "War and Beauty", Sheren Tang still has Yue Fei's ability to capture audiences with her modern look as a career-oriented woman--independent, full of charisma, ruthlessness, and insulting others to the ground. What does Hilda do when she wants to have a baby? She uses artificial insemination to reproduce. Hilda is evidently the role model for modern woman, and she is the soul character in "La Femme Desperado".

Many problems arises in modern women nowadays including career, love, marriage, non-married mother; now encountering 'older female and younger male' relationships, artificial insemination, and the equality between males and females. The series is able to grab a hold onto the audience although the series is only 20+ episodes long. The 3 different females with 3 different age groups played by Kate Tsui (24), Melissa Ng (32), and Sheren Tang (37) are very close to their own age. The series talked about issues that would arise for modern women like stress and other problems, but the ideas are not at all exaggerated. Melissa plays a traditional and conservative little woman. In portraying the role, Melissa is able to explore her versatility in acting. During her sad scenes, she was able to show off her weak side by flushing her eyes with tears. For her to take on this role, she is able to let go of her roles that she had been typecast for showing off her professionalism, elegance, calmness, and the smart side of her. In spite of this, she still lacks in the comedy area, but she has successfully widened her acting road.

As for Sheren, there is no need for more appraisals. She is basically the mother of acting; she is the whole package with her sharp eye movements, stable voice, clear enunciation and no exaggerations in her facial expressions. She is a natural when it comes to acting. Until now, she still has the self-confidence, power, and grace from Yue Fei. With such a powerful opposite to act by, the 2 male leads did not freeze up. In "Virtues of Harmony", Michael Tse's acting was ordinary, but when a strong character comes along, he is able to turn into a new leaf. In the first 3 episodes, Cheap Man was hated by every woman. Michael is able to play Cheap Man with no exaggeration, and he was easily into character. Cheap Man was cheap on the outside, but he was really kind at heart. Raymond Lam is able to wash off the unpleasantness of "Lethal Weapons of Love and Passion", playing the young energetic male who falls for the older female, Melissa.

*Credits to mingpao
Posted by hyn5 at 6:31 PM No comments: 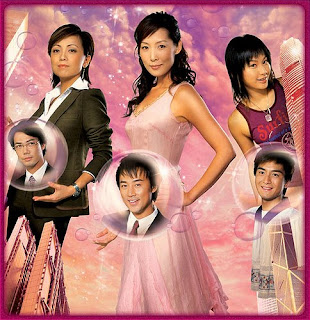 There is an old saying that goes, "It is difficult to be a daughter-in-law!" Seeing that the female status held a very low position in society back in the day. Although females and males have reached equality in modern society, females cannot avoid the fact of having the ability to reproduce and to become a responsible mother after giving birth. By separating females into 3 different age groups, TVB's "La Femme Desperado" focuses on modern women and centers the problems women will encounter. The idea for TVB's series is very similar to the movie "20 30 40", starring Sylvia Chang, Rene Liu, and Angelica Lee. Kate Tsui plays the 20-year-old female and the age categories for 30-year-old and 40-year-old are played by Melissa Ng and Sheren Tang respectively. In order to show more problems that women face in modern society, the duration of the series is evidently longer than the movies version. In today's society, women face many problems relating to stress. For example, issues like 'older female younger male' relationship, non-married mother, reproduction by artificial insemination, etc. The problems faced in the series "La Femme Desperado" are more in-depth than the regular mother-in-law and daughter-in-law relationship, women in power, and man and woman living together issues. With such an interesting and refreshing topic, it is a must-watch for the audience. The female audience will find it very understanding and touching.

In the series, Kate and Kenneth Ma start to date, but Kate's older sister, Sheren, opposes to the relationship because she thinks Kenneth is useless. Sheren tells Melissa to stop her brother, Kenneth, from seeing Kate. What may seem like 3 separate female experiences, they are intertwining as one whole phenomenon?

Sheren and Melissa each have their own problems. Sheren is a smart, independent woman, and she is the role model for career-oriented women. However, she has lost faith in marriage due to past relationship experiences. In order for her to have a baby that belongs to her completely, she plans on reproducing by artificial insemination. After becoming a non-married mother, Sheren has to face many stresses and many other problems. On the day of Melissa and Michael Tse's third wedding anniversary, Melissa discovers that Michael has been cheating on her. After their separation, Melissa develops an 'older female, younger male' relationship with Raymond Lam. Melissa was able to overcome her traditional beliefs and agreed to marry Raymond. Although they have resolved many stresses and problems before marriage, mother-in-law problems arise for Melissa, causing the love between husband and wife to go through difficult challenges.

In order for the ideas in the series to become more realistic, the 3 female leads got together in a discussion to share their female perspectives for the storyline. For TVB to take on such a bold attempt to be the series' story is a real gamble. Yet, this is a gamble that is worth taking.

*Credits to mingpao
Posted by hyn5 at 6:24 PM No comments: