Bosco Wong, accompanied by 24 pretty girls, including Priscilla Wong, Yumiko Cheng, Wiyona Yeung, Crystal Fung, Tiffany Lau, Bowie Cheung, Ashley Chu, Wingto Lam, etc., attended a promotional event for "Heart and Greed", introducing the womanizing side of his character, which is the wealthy younger brother of Louise Lee. During the event, Steven Ma, who is guest-starring, appeared to compete for a girl, saying that Priscilla was originally his love.

Bosco expressed that this is the series with the most pretty girls surrounding him in his acting career, and he does not dare to think about the number of bed scenes, but he is sure that his partners are all females with good figures. He also has to build his muscles to handle the skin-revealing scenes. He said, "Wai Siu Bo only had seven wives. I have 20-some. Believe that it will be very fun. Perhaps know that this is the last time that I am performing as a TVB artiste, so treating me better!"

Not Afraid of Japanese Model Girlfriend Getting Jealous

When asked whether he was afraid of rumours, he laughingly said, "If have to have rumours, then should have rumours with all. I hope to break the rumours record!" Was he afraid of Japanese model girlfriend Jun getting jealous, Bosco expressed, "Crazy! I am a professional when I film. Wait until she sees it first!"

Steven revealed being a couple with Priscilla in the series, but he dies upon appearing because he gets a heart attack from making money to buy a flat. Priscilla later falls for his good friend, Bosco. Steven said, "Producer Lau Ka Ho has returned to the company to do a big production. I want to give my support, but I am filming 'Deep in the Realm of Conscience' at the same time, so I can only guest-star for four scenes". Priscilla said that, in the series, she only cries for Steven at his grave, so she feels that it is unfortunate to not have intimate scenes. Steven said that he is a Christian, so there are no taboos when filming death scenes. On the contrary, recently, he has been filming 20-plus hours a day for 'Deep', so he is worried about an old eye injury: "Was injured by a horse while filming 'A Change of Destiny'. My right eyeball is 3mm more sunken in than normal. Now, when I work too long, there is a groove on the eyelid when I work too long. Worried about the eye depression worsening, so I plan to see a doctor".

Yumiko, who is already a mother, is filming another TVB series after ten years. This time, she will be intimate with Bosco in a sexy look, and she does not plan on notifying her husband: "So rare to be able to get rid of my husband. The series is filming in Hong Kong. The timing is convenient for me to go home to take care of my daughter". Wiyona, who was sexily showing off her chest, is one of Bosco's girlfriends in the series, and is not resistant about filming intense scenes. She said, "Accepting it, since he is a handsome guy!" Her character is also a martial arts actor, so she has some action scenes.

Has the Intention of Going into Business with Tavia Yeung, Ron Ng Scared of Losing Money and Does Not Dare to Go All In


TVBE Clip
TVBE Clip
TVBE Clip
TVBE Clip
Pearl Clip
i-CABLE Clip
ontv Clip
Ming Pao Clip
HotTV Clip
More Forms Clip
Tudou Clip
GZTV Clip
Artistes Tavia Yeung and Ron Ng attended a star entrepreneurship press conference as guests. Tavia expressed being interested in going into business with Ron: "We both have many ideas. See whose idea is more innovative. Have to have time to discuss it". Ron expressed that the most important is that the product is suitable for oneself, the public, and has a purpose before launching it. Tavia continued by expressing that one must give everyone confidence when doing business: "Not necessarily usable. Can be a type of pretty thing or knowledge gained to share as a business experience. (Confirmed to invest this year?) Have to give some time to think about it. If there is an unconventional business, hope to come out with a different identity. Although it is a star entrepreneurship, also want it to reflect the public. Want to create a business with fans, and to not have a distance".

Regarding the investment amount, Tavia said, "Firstly, do not talk about money. Star entrepreneurship is a gimmick". Ron expressed being a beginner in doing business: "I have never gone into business. Do not know about it. I will invest half of what she (Tavia) invests. Scared of losing money!" Tavia added that an entrepreneur must have the attitude of not necessarily making money...able to learn from experience.

Tavia Yeung Has an Acting Craving, Wants to Film Series

Regarding "Heart and Greed" beginning filming, did the producer look for her? Tavia said that the producer looked for her earlier; however, at the time, she had to get married. The schedule was not planned yet, and also felt that it was not the right timing, so she turned it down. She continued, "However, now, I have completed the play, so my body is lighter. If there is a suitable series, and some people have also said that they miss me online, I also have an acting craving. I have also watched myTV SUPER with my mom. Have re-watched some of my series". Ron immediately laughed at her, saying, "You can even tag this. When I was in TVB, they did not give it to me to watch". Tavia then said, "There are a lot of things to watch".

Related post: 《我瞞結婚了》 "I Hid the Truth About Being Married" Costume Fitting

*Credits to tvb, LovingTBB, Love Fung, and TVBUSAofficial
Posted by hyn5 at 8:30 AM No comments:

*Credits to Fred Files, junejune yeung, TVBUSAofficial, and 同弘匯
Posted by hyn5 at 1:00 PM No comments: 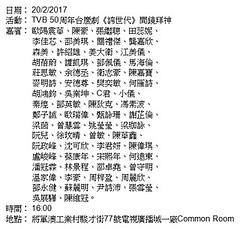 Personal Note: Will probably just end up being another Joe Chan series where the supporting roles usurp the screen time of the leads, especially with such an extensive cast and a greater episode length....

Surprised that Ali has a higher billing than Maggie.

Hoffman Cheng on "The Green Room"

Stephen Ho on "The Green Room"

Aaryn Cheung on "The Green Room"

Kitty Chung on "The Green Room"

*Credits to LovingTBB and reiakiryu
Posted by hyn5 at 6:30 AM No comments:

Dicky Cheung said that there are three reasons for returning to TVB this time, which all revolve around the word 'affection'. He said, "Firstly, this year, TVB is 50 years old...an extremely important year. My performing arts life began here. Grew up well here, and reached my peak. Although not considered to have flown very high, but did not lose face when going outside. Have to thank my mother school".

Dicky said that, secondly, he has to thank the Hong Kong viewers. The focus of his work has not been in Hong Kong for almost 20 years; however, every time he returned to Hong Kong for work, he would receive the cheers and applause of Hong Kong viewers. He even does not have to wait in line for seating when having tea, and viewers also ask him when he would return to Hong Kong to film a series; thus, he hopes to film a series for Hong Kong people to repay Hong Kong citizens. Dicky expressed, "The third reason is to thank one of the important women in my life, which is Catherine Tsang. She watched me grow up. She even knows how many girls I wooed in TVB, but she never forced me to come back. This time is an important day. She personally invited me, so without saying anything further, I agreed to do it".

Personal Note: This was the best cast that TVB could get to act alongside Dicky?! o_O 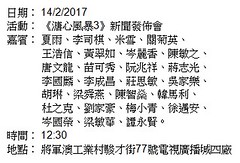 Personal Note: Don't know why this installment is focusing on the 'new actors', when it was the veteran actors who made "Heart of Greed" popular in the first place....

Gary Tam on "The Green Room"

*Credits to LovingTBB and 狂愛TVB
Posted by hyn5 at 8:30 AM No comments:

'Can Also Look if Married'

Kenneth, who portrays a general, laughingly said that he felt very nervous on the first day of filming. The cast and crew also need time to adjust. Regarding the new series having many females but few males, he expressed temporarily not finding it noisy: "Everyone is quiet. Looking at the script by themselves...many still be adapting to the environment". Edwin laughingly said, "May play mahjong in a few days!" When asked whether it was eye candy, Kenneth laughingly said that he definitely must enjoy looking at the females to his heart's content. Instead, Edwin, who already has girlfriend Priscilla Wong, said, "I'll leave it to Kenneth to look!" Kenneth laughingly said, "Why not able to look! So many pretty females. Can also look if married!" Regarding having a romantic storyline with rumoured girlfriend Jacqueline Wong, Kenneth expressed that there is no detailed script yet: "Do not know how it is yet. Only know that I saved her, so she likes me. (Can make something false become true?) Say it however you like!"

Candy, who has not filmed a series in over 20 years, expressed having to practice walking and remember long dialogue...full of difficulty: "Already memorized the dialogue last night, but everyone's requirements are very strict. I am also filming an ancient series for the first time. Have not experienced my heart beating so fast in a long time!" She expressed not lacking in arguing scenes with Angie because the two have a family feud: "Also labourious to film arguing scenes. I usually do not yell at people much. At most, would yell at my sons, but they would not talk back. However, the producer said that I have to yell at people elegantly...cannot be a woman hysterically shouting and cursing in public".

Because of a waist trimmer, Pinky was busty. She and Angie both have a lot of work to prepare. Pinky said, "The most difficult is challenging classical Chinese and hand gestures. Now, it feels as though I have gone to camp. Not caring about everything outside this half year. When asked whether she would be afraid of a female-oriented series having a lot of gossip, Angie said, "Wait for it! Unavoidable for a palace series". Miss Hong Kong Erin Wong portrays Angie's right-hand woman; she, who has a slim figure, said that she has to gain weight.

*Credits to orientaldaily
Posted by hyn5 at 2:30 PM No comments:

"May Fortune Smile on You" Theme Song MV

Related post: "May Fortune Smile on You" Theme Song

*Credits to TVBUSAofficial
Posted by hyn5 at 7:00 PM No comments: