The Making of "On-Lie Game"

- Michael Miu is not in the Special Duties Unit (SDU); he is in another department. He is partnering with Rebecca Zhu.
- Ron Ng will play a member of the SDU. He has two girlfriends: one is Elaine Yiu, while the other is Sisley Choi.
- Eddie Cheung will play an SDU Superintendent. He is Joe's superior. He is gentle and can accommodate people and accept others' opinions. He is Sharon Chan's husband.
- Roger Kwok will play a microbiologist and expert in biological and chemical weapons research. He is from a rich family. He is Elaine's elder brother. The story starts with him: he researched a super bacterium and antidote; the fight for this 'biochemical weapon' leads to a war. He is considered both good and evil.
- Joe Ma will play a fierce SDU team leader. He is the superior of Ron and Sisley.
- Edwin Siu will play a scientist. When he first appears, he seems to be a homeless person.
- Jeannie Chan will play a Senior Inspector of the Organized Crime and Triad Bureau (OCTB). She and Bosco Wong are a pair.
- Sisley will play a member of the SDU. When she was young, her parents already left her, so she had to take care of herself; she becomes strong and protective of herself. She has a sad romantic storyline with Ron.
- Rebecca will mainly have scenes with Michael, Joe, and Moses Chan.
- Elaine will play a rich girl. She is Edwin's superior. She is Roger's younger sister. She has a romantic storyline with Ron. Because Ron has to investigate a case, he gets close to her.
- Jacky Cai will play a 20-year-old university student who is also a reporter. She is very upright. She has a romance with Edwin.
- Sharon is in the Health Department. She is Eddie's wife.
- Andrew Yuen will play the upright leader of the police force.
- Adrian Chau will play a member of the Major Crimes Unit.
- Wiyona Yeung will play a member of the SDU.
- Chris Collins will play an international anti-terrorism expert.

Personal Note: The cast is so stacked...how is the screen time going to be distributed?

Michael is pairing up with Rebecca?! o_O

*Credits to TVBUSAofficial, on.cc, bastilleent, moreforms, youku, and mingpao
Posted by hyn5 at 11:00 AM No comments: 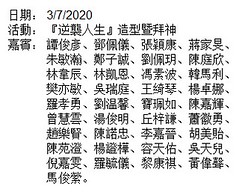 - 20 episodes long.
- There are parallel universes and time travel. The plot has fantasy and is light.
- The story tells of Shaun Tam's character taking a chance to return to the past, hoping to make up for the mistakes made in the past to avoid the occurrence of a tragic ending. Can his strike back reverse a known future, or will it bring more incalculable crises?
- Shaun and Gloria Tang's ending is that they will be killed in a building collapse accident. However, this death is only their first life. Shaun will be given an opportunity to return to the past to save the lives of himself and his lover.
- The story begins with an old building that was acquired by a real estate business and is about to be demolished. While engineer Shaun was inspecting the old building, he dies in a building collapse accident. He wakes up unexpectedly and finds himself back to nine months before the collapse of the building. He decides to use this opportunity of rebirth to reverse his own destiny and save his girlfriend, Gloria, his younger sister, Angel Chiang, whom he had just recognized, and the householders who refuse to move out of the old building.
- Shaun will play Si Kwong (時光), a civil engineer. He and Gloria are already dead in the first episode. He wakes up nine months later, and he also has an opportunity to reverse his life. He wants to change his destiny and make a decision that differs from his 'previous life'. However, every time he makes a change, it brings about even more unknowns, which brings forth even more changes and crises. In order to save his girlfriend and younger sister, he decides to not pursue Gloria and to not recognize his younger sister. He thought that, without knowing them, they would not have encountered accidents. He, who knows the ending, discovers more unknown secrets and conspiracies in his second life. The story is like parallel universes, so his actions trigger different developments and changes; thus, for his scenes, that is, for the same scene, two faintly familiar but different scenes will be shot.
- Gloria will play Hailey Cheung Man (張旻), Shaun's girlfriend.
- Cheung Wing Hong will play an architectural engineer. There is a love triangle among him, Gloria, and Shaun. He has always liked Gloria; Shaun always secretly helps him pursue her.
- Angel will play Au Yeung Ka Sun (歐陽家純), Shaun's younger sister. She will be killed at the beginning of the series, and Shaun will go back to nine months before to save her. She has a romantic storyline with Brian Chu.
- Brian will play a mixed Korean. He is Shaun's good friend who has always thought he was an alien.
- Timothy Cheng will play the boss of an engineering company.
- Moon will play a rather free-spirited girl who has been married twice, but her husbands died both times. She is also the daughter of a gang leader. She carries on in her old ways regardless of what others say. She has a tough appearance and always yells at people, but she is actually hiding her uneasiness and is weak on the inside. She, Gloria, Angel, and Toby Chan were good friends in middle school, but because there were some misunderstandings, they separated when they got older; they are all girls who have seen the world and have become middle-aged women. She wears tank tops and shorts.
- Gilbert Lam will play the boss of a real estate company. Amy Fan is his wife; Iris Lam is their daughter.
- Amy will play the boss lady of a real estate company. She is Gilbert's wife.
- Wong Yee Kam will play Timothy's wife.
- Iris will play Tong Chung Kei (唐仲琪), the daughter of Gilbert and Amy.
- Baby Bo will play 「琴姐」.
- Tong Chun Ming will play Lee Yee Kam's younger brother.
- Ivan Yau will play Lau Sing (劉星), a barista.
- Gordon Siu will play Ken Wong Wing Leung (黃永亮), Gilbert's younger cousin.
- Tiffany Ng will play the younger version of Toby's character.
- Carmen Ngai will play the younger version of Moon's character.
- Yuki Law will play the younger version of Angel's character.
- Harriet Lai will play the younger version of Gloria's character.

Personal Note: The parallel universes/time travel theme has been rather popular in dramas recently....

Gloria, Angel, Moon, and Toby are being middle-aged women?! o_O

Funny how Angel did not want to play her younger version, while Moon and Gloria did! :P

- The story revolves around a secondhand shop that specially sells exquisite old objects.
- Matthew Ho will play Wai Tak Sun (韋德信), who has a supernatural power such that, through touching old things, he is able to know the past of the old thing's owner. While discovering the stories behind the old things, he will also help the owner make up for his or her inner pain and fulfill his or her wish. He has a rather tragic past. He is distant with the outside world and does not really want to be in contact with people.
- Hera Chan will play Fung Cho Yi (馮祖儀), a girl from a wealthy family, as her family owns a secondhand shop. She adores her mother (Eva Lai), father (Lee Sing Cheung), and elder brother (Maverick Mak). She is an environmentally friendly person who donates old items to those who need them. She discovers Matthew's supernatural power, so she uses him to increase the shop's business. She has romantic storylines with James Ng and Matthew; she gets caught between James and Matthew. Matthew is her assistant.
- James will play a young and promising doctor. He is Hera's boyfriend.
- Raymond Cho will play Yvonne Lam's younger brother. He is superstitious and exaggerating. He is also called 「浮誇怪」.
- Yvonne will play Matthew's mother.
- Maverick will play a bad guy. He makes his father mad, while his mother spoils him. He bullies his younger sister and is greedy for money, and his mother accommodates him. He wants to snatch the shop.
- Lee Sing Cheung will play the boss of a secondhand shop. He did something really bad in the past, so he is ill for the rest of his life, but he has his wife, Eva, to take care of the household.
- Eva secretly takes care of everything because her husband is ill. She values males above females. She favours her son but does not show it outwardly.
- Strawberry Yeung will play a funding boss who is rich and slightly domineering. James is her son.
- Eric Cheng will play the boss of a secondhand shop. He is Yvonne's husband. He dies because of an objects. He will appear in flashbacks.
- Yu Yeung will play an employee of a secondhand shop who always slacks off.
- Carisa Yan sells chickens. She is a bad person. She swindles people everywhere.
- Aurora Li will play a broker in the London gold industry. She is the daughter of Gary Chan and Amy Fan; her parents' relationship is not very good, and she does not want to follow either side, so she gets into London gold to make fast money. She wants to break away from this house, but social events are inevitable in this industry. Sometimes her boss tells her to seduce her clients to see whether she is able to get a big contract signed. She is in the first case.
- Gary has a chicken stall. Amy is his wife, while Carisa is his girlfriend. Aurora is his daughter.
- Lee Kai Kit will play Kong Keung, an experienced employee of a secondhand shop.

Personal Note: Perhaps TVB should see the reception for Hera's acting before pushing her to leading roles so quickly, though her role seems to be a vase in here....