Personal Note: Flora doesn't dance like an ahjumma...she's still got it! :D Never saw her dance like this before...can't wait to see more! 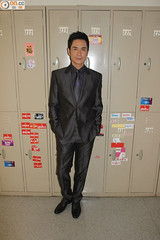 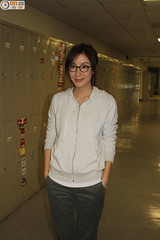 Kevin Cheng and Tavia Yeung were in Tseung Kwan O TVB City doing a costume fitting for Producer Fong Chun Chiu's new series, "Eye in the Sky". In the series, Kevin, who was in a suit, goes from being a cop to a security guard who investigates cases, and he will also be involved in a love triangle with Tavia and Ruco Chan, who plays his younger brother.

Kevin, who has a ligament injury in his right leg, will be working on the new series while injured. He said that the injury is in the process of recovery. The action scenes in the series will be arranged to be filmed near the end...will be filming non-action scenes first when work begins in May.

Tavia, who was wearing black frames for the fitting, plays a homebody in the series. She laughingly said, "In real life, I am also a homebody. Usually, apart from work, would also not go out much. Very happy to collaborate with Kevin again. The last series was already 'A Fistful of Stances'".

Personal Note: Tavia's look reminds me of Yoyo Mung, and her role also seems like a role that Yoyo would portray. 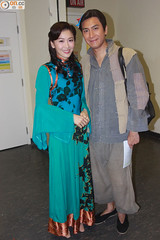 Kenneth Ma and Niki Chow were in TVB's Tseung Kwan O TVB City filming the new series "The Misadventure of Zoo". Niki wore a blue qipao, while Kenneth changed into a beggar look and then a warlord look. When taking pictures, Kenneth had clips in his hair; Niki immediately suggested that he pull them out, but the humourous Kenneth laughingly said that he could graciously have his picture taken.

Niki greatly praised Kenneth as being a good partner. When filming humourous scenes, they would also come up dialogue together, and he is also willing to accommodate her funny movements. Niki said, "Kissing on the cheek is the most intimate already! However, the dialogue is quite cat-III like Stephen Chow's ancient comedies. There is a lot of comedic effect using the present dialogue in that era. For many scenes, just filmed them first. If feel that it is over afterward, will do dubbing. (Were there any NGs?) Many. Don't understand why it's an NG when there's a sound reception problem, and also said that there was noise. There was a scene about me giving him a kiss; he was so happy that he fainted. In the end, NG-ed eight times, but these are trivial matters to Kenneth!" Niki also laughingly said that the production team accepted money from Kenneth.

Kenneth laughingly said that it was all thanks to the production team that he was able to be experience such luck. He said, "I did not bribe the director. It was everyone's help. I am also very happy. (Kissing on the cheek is not enough?) Very happy! That day's lip print left a very deep impression. At night, so happy that I couldn't sleep!"

Personal Note: Don't like the sub song by Elvina...too boring!

Fennie Yuen on "The Green Room"

*Credits to TVBUSAofficial and leerainrain
Posted by hyn5 at 8:30 AM No comments:

Personal Note: Like the song...getting hooked on it!
Posted by hyn5 at 11:00 AM No comments: 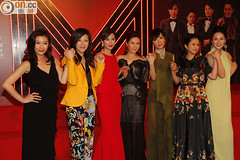 Artiste Flora Chan attended the 'M Club Premiere' for the series "Never Dance Alone". She expressed that, before accepting the series, producer Eric Tsang already told her that her role was not cute. She said, "That's okay because TVB usually looks for me to do likable roles. After looking at the script, thought that this girl deserved sympathy...only like that because she wants the approval of others. The character is also very fun". In the 30-minute clip that was shown at the premiere, she was seen dancing and showing off her skills. She laughingly said that she only practiced for over an hour, and had to film the day after: "When getting into position, the director then said that he had to film me dancing all the different parts in a very small area...very difficult".

She, who is currently studying to obtain her master's degree in Education, expressed that she is already in her final term: "After handing in my homework, I should be able to graduate. I will be very busy soon...have to fly to Mainland to film a series. Afterward, have to come back to hand in my homework, but happily busy. (Would not be able to attend the promotions for this series afterward?) Do my best to support it".

Personal Note: Flora finally showing off her dancing in a series! :) 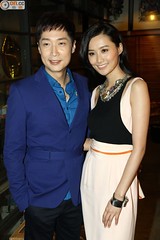 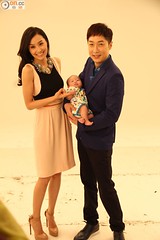 Today, Steven Ma and Fala Chen were in Tsuen Wan filming an MV for their duet song, "Platonic Love", but Steven said that this song wants to express the brother-sister love between a guy and a girl: "It's about my heartfelt wishes. I told the producer that I wanted it be a song about our feelings. We filmed four series; we were brother and sister in two of them. She calls me 'elder brother'. Want to talk with an open heart for many things. Does not have to necessarily be a love song for a guy and a girl".

Fala revealed that Steven has many scripts on hand. When Steven told Fala to chip in money to invest, Fala laughingly said, "I don't have money! That's my hard-earned money!" Steven humourously told Fala's manager, Claudie Chung, to invest. In addition, Fala revealed that she will be filming a movie about Cheung Po Tsai with Ronald Cheng soon.

Jessica Hsuan recently became a skin care spokesperson. Earlier, to film a promotional ad, she wore a back-revealing, close-fitting, low-cut, leg-revealing dress that showed off her figure. Jessica, who has been really fit recently, was also not afraid of close-up shots...extremely confident! During the shoot, she even actively studied the angles with the photographer...extremely serious.

Twelve years ago, Jessica endorsed this brand. This time, being invited again, she also attaches great importance to it. Although her schedule is packed, she was still in high spirits on the day of filming. Apart from work, when asked about romantic matters, Jessica thinks that she cannot make a decision that she would regret, so she will naturally welcome fate's best arrangement.

*Credits to the-sun and BellaSkinCare
Posted by hyn5 at 6:00 AM 1 comment:

"The Misadventure of Zoo" Blessing Ceremony

Artiste Tracy Chu attended the blessing ceremony for the remake series "The Misadventure of Zoo". She expressed that she is a cameo role, portraying a social worker in the '80s in the series. She will have scenes with the old Kenneth Ma and Niki Chow. She and Kenneth, who were previously rumoured, are collaborating for the first time after being rumoured. She said, "It's this series after 'The Hippocratic Crush II'! (Awkward?) Would not! (Spark again?) Will not! I am facing an old man in his 80s!"

Artiste Kenneth Ma wore a wig when attending the blessing ceremony for the remake series "The Misadventure of Zoo" because he is working on his other series, "Noblesse Oblige". He revealed that "Noblesse" still has a few days of outside filming, and said that he is only able to sleep for three hours each day.

When talking about portraying Adam Cheng's role in "Misadventure", he expressed that he would be appearing in old age when it begins, starting the series in reverse order. He also said that he is not afraid of being compared by viewers...thinks that the younger generation has not watched the series from 30 years ago. He said, "The touching and classic scenes will be kept, but there will also be humourous scenes!" He laughingly said that the character resembles himself...has a romantic storyline with female lead Niki Chow, and is also loyal, as well as honest and sincere.

Niki Chow Free from Rumors: Okay to Kiss Kenneth Ma on the Cheek

Artiste Niki Chow attended the blessing ceremony for the remake series "The Misadventure of Zoo". In the series, she will have a romantic storyline with Kenneth Ma. She expressed that she specially watched the original series. She, who is portraying Louise Lee's role, expressed that there are humourous components in the series. Niki revealed in advance that there would be singing and scenes resembling filming an MV in the storyline. When asked whether there would be intimate scenes, she said, "Not that many of these scenes in that era. At most, it would be kissing Kenneth on the cheek!" She also said that there is no pressure toward this role, and there are many looks, so extremely like the role.

When asked about Kenneth and rumoured girlfriend Tracy Chu collaborating again, she said, "Really? I don't know, but it's not relevant to me anyway! I am free from rumours". She also thinks that the two's rumours are not true.

*Credits to kennethma.org and the-sun
Posted by hyn5 at 5:00 AM 1 comment:

"You Are So Hard to Forget" - Wong Cho Lam


"You Are So Hard to Forget" - Julian Cheung
*Credits to Jason Diane Koo and starstarfans
Posted by hyn5 at 12:30 AM No comments:


Letv Clip
Youku Clip
Steven Ma and Fala Chen went to a radio station to promote their duet song. This song talks about the love between a godbrother and a godsister. Steven said that they also refer to each other as brother and sister in private. Fala said that, when she just entered the industry, she would always ask Steven how to handle the paparazzi.

Would they ask about their romantic matters and contract renewal with TVB? Steven laughingly said, "I really support people to follow their heart's desire and to be themselves. However, a relationship is two people's matter. Regarding contract renewal, then no". Fala said, "I always ask him whether he would get married. The girl beside him has a lot of positive energy, but he is a Chaozhou macho man...girls need to be comforted".

Personal Note: Apart from filming an MV for their duet, Fala will also be the female lead in an MV for Steven's Mandarin song, "I Am Getting Married" (我要結婚了). Does this mean that Steven is getting married soon?


*Credits to the-sun, letv, youku, LaShine陳法拉國際後援會, and TrueStarHongKong
Posted by hyn5 at 6:00 AM No comments: