Kate Tsui and Kenneth Ma Do Not Avoid Suspicions, Learning to Make Sushi 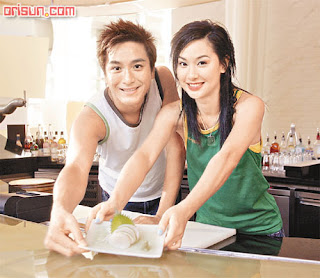 In the series "Hard to Be a Woman", the rumoured pair of Kate and Kenneth will be dating. Kenneth will be portraying a sushi master, who will be teaching Kate to make sushi. Sparks will also be flying between the arguing pair. Therefore, on the previous day, the two went to a Japanese diner to study under a skilled sushi chef, where they talked and laughed merrily without avoidance.

Since Kenneth and Kate will be having a relationship in the series, they were asked whether they would be worried about rumours arising again. With ease, Kate said, "Filming hasn't even started, and rumours already have. But I really have to thank them for helping promote the series. It's only acting--nothing to be afraid about. I have previously worked with Kenneth on some programs. Anyone in this industry already understands this type of news". Asking if it would be awkward if the plot involved intimate scenes, Kenneth namely said, "Don't know if there'll be any intimate scenes; even if there are, it will only be acting. I have acted in many series before, so it won't be awkward, but Kate has only begun to act, so I don't know if she is afraid or not".

Apart from learning how to make sushi under a master, it was also the two's first time making a Japanese dish, so there was some clumsiness. Under the direction of the master, Kate learned very quickly; someone even pointed out that her skill resembled that of a master more than Kenneth's. Kate smiled and said, "We're about the same, but later in the series, the plot will really be about the 'student surpassing the teacher'. The happiest thing is that I am able to eat sushi, combining work with entertainment".

In other news, there was a magazine that earlier photographed Kate swimming in a bikini. She felt extremely helpless, as she expressed that she was swimming in a personal space but was still photographed. She feels unhappy; however, all she can do is find another place to swim. As for not being exposed, Kate firmly says, "When getting a suntan, I certainly wouldn't dare loosening the straps--I wouldn't even dare wearing a bikini at the beach".

*Credits to orientaldaily
Posted by hyn5 at 4:26 PM No comments:

The Making of "Healing Hands III"