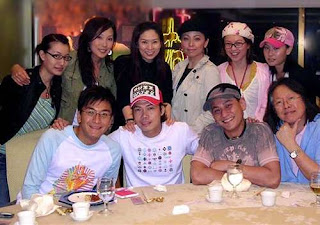 "La Femme Desperado" has received great ratings and positive feedback. No wonder people often compared the series to the big budget production series "The Dance of Passion". The reason why viewers would compare the two series is because of Sheren Tang. Although the cast and crew members are the same [all except Sheren] as in "War and Beauty", viewers are disappointed in Sheren Tang losing out the 'Favourite Actress Award'. Who would have guessed that a small production series would win over a big production series? As mentioned earlier, it is all thanks to Sheren!

In "La Femme Desperado", the coupling of Hilda and Cheap Man brought a lot of sparks to the show. First, they have a baby, and they late start to develop feelings for each other. Michael Tse played Cheap Man with 'cheapness' that bought tears. Audience members were touched by his singing of love songs and talking about this life as an orphan. Despite his soft side, his cheap genes surfaced again once he was rejected.

Although the series received many praises, Sheren Tang only accepted them modestly. She never openly talked about "The Dance of Passion". Michael's performance opened many eyes by positioning him as a performing actor. Raymond Lam bought a lot of energy for his character. His 'older female and younger male' relationship with Melissa Ng was widely accepted by viewers due to the fact that they were touched with his direct love towards Melissa. As for Melissa, she has successfully climbed up the ladder to stable herself as a Fa Dan. She was very into character. The character has also widened her acting skills by not just portraying professionals.

In order to push ratings to a new high, TVB arranged a 30-minute special, "Really Hard Being a Woman", hosted by Carol Cheng to be aired before the last episode. After the airing of the final episode, a 15-minute alternate ending version followed. This has never been done in TVB history before. It is such a wonderful series!

*Credits to mingpao
Posted by hyn5 at 6:35 PM No comments: