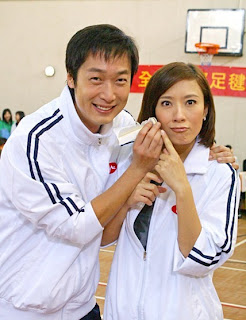 hyn5 @ Fortunate City will be on hiatus since I will be away in China from March 10 to April 16, 2009. Therefore, no new entries will be posted on this blog until my return. In the meantime, please support the sites on my links. Take care and don't forget to come back to visit the blog! Ha ha....

Info on 《宮心計》 Beyond the Realm of Conscience

Inside info has it that Moses Chan and Kevin Cheng's roles are not big (I think this was a given with all the females in it). Also, insider is also saying that Charmaine Sheh and Tavia Yeung are main, whereas Michelle Yim and Susanna Kwan are supporting.

How supporting can Michelle and Susanna be? It makes sense for Kevin Cheng's role to be smaller since he is going to film "Iron Horse Seeking Bridge" in April/May.
Posted by hyn5 at 11:12 AM 12 comments:

"Twin of Brothers" - Heading Off to Mainland 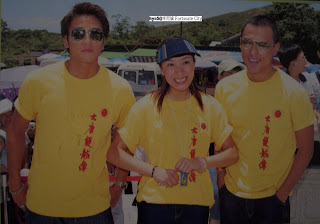 This picture was taken on July 17th, 2003, at Lantau's praying before departing to Mainland to film for "Twin of Brothers". It must have been a very hot day because Ron and Raymond are both sweating!

The caption for this picture described Ron as a newbie. That was true because "Find the Light" aired on August 8th, 2003; however, "Triumph in the Skies" did not air until October 27th, 2003.

I really wanted to post this picture of the three of them in the post where Ron and Raymond were presented with their 'Ten Year Gold Medal' before the actual ceremony (pre-ceremony). However, I looked everywhere online, and this picture was nowhere to be seen. So again, I dug this out of my stash. Enjoy!
Posted by hyn5 at 7:53 PM 10 comments: 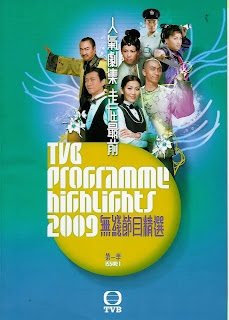 *Credits to AC @ My Favorite TVB for the scans! "Man in Charge" is finally releasing! I've waited so long for this. It is will air after "The Winter Melon Tale" on Monday, April 6, 2009, at 8:30pm. The series was filmed in May 2007, but there is no way TVB was going to warehouse it. Just like "D.I.E.", if they were going to warehouse it, wouldn't it have been released overseas? Out of all these six series on this highlight, only Ma Ming and Kate's names are mentioned in the series description. That is because the description was taken from a previous highlight. I like the look of the poster! Also, both Ma Ming and Matthew Ko sing the theme song.

As for "Just Love II", I don't know what they are going to talk about in this sequel. Didn't Johnson Lee end up with Fiona Yuen? "The Threshold of a Persona" and "The King of Snookers"

TVB finally decides to place Yoyo's name second in "The Threshold of a Persona". Her name was fourth at the costume fitting. Nothing about this series interests me at all. Not the producer, Marco Law Wing Yin, not the series topic, and not even the cast. Didn't Catherine Tsang and Marco learn their lesson from "Always Ready"? What's up with the colour of the poster? It seems as though the light has washed out the white in their uniforms making it look as though they are wearing scrubs with badges and hats. To me, this series has the potential to be a warehoused series.

I usually watch Adam Cheng series, but Patrick Tang takes the interest away from "The King of Snookers". Stephen Chan is trying to push Patrick up to siu sang status. Too bad Sammul Chan was filming "Wong Lo Fu Snatches Wife"...my interest for this would so come back! Ha ha.... As for the poster, you would think that Adam would be shooting the pool ball instead of Patrick. Rumour has it that both Adam and Patrick sing the theme. Since when does Adam share a theme song with somebody other than Liza Wang? "Rosy Business" and "The Beauty of the Game"

I am very looking forward to "Rosy Business". Not only do Kate and Patrick have two series in this highlight, but producer Lee Tim Sing also has two series in here. The series is worth watching from just looking at the list of 實力派s like Sheren Tang, Wayne Lai, Kiki Sheung, Kara Hui, Elliot Yue, Susan Tse, etc. As for the English title, the definition of 'rosy' is bright, cheerful, and optimistic. Maybe that is why Ron and Kiki are smiling in this poster. I absolutely love Ron's bald look! Ha ha.... Ron also sings the theme song.

The only thing that I like about "The Beauty of the Game" is the English title (the play on the entertainment business being a game). Other than that, this also has the potential to be warehoused.
Posted by hyn5 at 1:51 PM 9 comments: 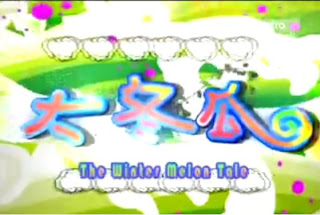 Personal Note: I really enjoy the theme song! It describes the characters in the series. I like the song so much that I even spent ten minutes typing the Chinese lyrics out. Ha Ha.... However, I'm not too sure about who sings it though. FAMA? But they don't have lazy sounds....

Update: Just found out that Don Li and Lai Lok Yi sing the theme song, and Roy Chow wrote the lyrics. No wonder there were so many lazy sounds. That would explain it. Ha ha....
Posted by hyn5 at 11:50 AM 14 comments: 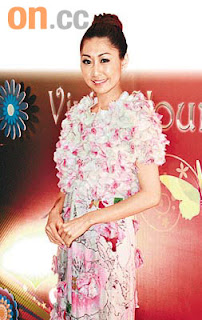 Nancy Wu was at an event with Deep Ng's present girlfriend, Jacquelin Ch'ng. When the reporters requested for the two to stand together and take a picture, Nancy's manager expressed that there was no need to. Nancy said, "We don't know each other, so there is no need. I would like year 2009 to wash away all of year 2008's unhappy matters. I don't want to be associated with these two names (Deep Ng and Jacquelin Ch'ng) anymore. (What about with Kenneth Ma?) That's all right!"

Sweetly Praises Him as Being Good Guy

Although Nancy has denied her love relationship with Kenneth, she could not restrain from revealing her sweet smile and also praising him non-stop. When asked if they were love at first dance? She said, "No, I didn't dance with him. We are still good friends. I'm not saying that he cannot be my boyfriend. (Your rumours were in the C1 headlines!) I'm not afraid of these headlines! I can even accept more of these headlines, since my rumoured partner is so good! (Does he have potential?) Yes, he has a good reputation among artistes. And he is also a dong ka siu sang, but I don't think he is pursuing me. (Is he your ideal partner?) I don't know! He has such great attributes. It is very hard to find such a good guy!"

Personal Note: I can't help myself from not translating when so many people sing Ma Ming's praises. Ha ha....

Even though Ma Ming and Nancy did not dance with each other on "Strictly Come Dancing II", they have already danced with each other at TVB's 37th Anniversary in 2004. They were paired up with each other in the music skit along with Joe Ma, Melissa Ng, Sammul Chan, Kate Tsui, etc. Ha ha....

A new season of the popular game show that premiered in 2006 has been finalized to begin recording soon. The hosts will continue to be Ronald Cheng, Edmond Leung, and Alex Fong Lik Sun. The entire season will consist of 13 episodes.

Some of the female artistes who have previously gone on would most likely go on again. Will Kary Ng burn down the studio this time? Is Ella Koon going to put on kitchen repellant base concealer makeup before she cooks? What secret ingredient is Yoyo Mung going to tackle now?

Will a singer, model, or actress be crowned 'Beautiful Cooking Goddess'?

Who would you like to see on the new season of "Beautiful Cooking"?

Personal Note: Some of the female artistes whom I would like to see go on and have not gone on would be Anita Yuen, Jessica Hsuan, Miriam Yeung, Charmaine Sheh, Denise Ho, Selena Li, Nancy Wu, Mikki Yao, Linda Chung, and many more.

Wouldn't it be funny to see Eric Tsang and Bobby Au Yeung to be guests judges? I can just picture them tasting horrible food. Ha ha....

Saw a lot of netizens on the HK Discussion Forum are rooting for Selena to go on.
Posted by hyn5 at 12:41 PM 9 comments:

News on "Heaven and Earth"

Nick Cheung said on TVBE, "I have agreed to film a series with TVB, but because of production difficulties, the process is being dragged out. I do not dare to confirm when I am coming back to film. I still have to read the script to see if the storyline is refreshing".

Personal Note: In other words, the whole series is not confirmed yet. It seems as though TVB does not want to this big production series to happen. I can see why TVB would consider this because the economy is low and Chik's past two big productions have failed miserably. I'd suggest for TVB to hold off on this type of series for a little while longer. It would also be a smart move.
Posted by hyn5 at 8:19 PM 2 comments: 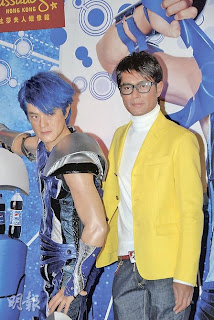 Louis Koo was present at Madame Tussauds Shanghai to unveil his "Blue Warrior" wax figure. Louis is considering spending money to make another wax figure, so he can have a memento when he retires. "It takes a couple million dollars (HKD) to make one of these (wax figures), and they also must have the time to make it. Thus, I'll think about it in ten years. At that time, it can be like a toy figurine, and you can help him change clothes. For instance, pajamas, superman clothes, or it doesn't have to wear any clothing at all".

Since Louis is the first Pepsi spokesperson to have a wax figure, does this make him Pepsi's Number One Brother? "I think Jolin Tsai is the Number One Sister because she is the only female spokesperson".

Personal Note: That's pretty cool that Louis has a wax figure, even though at some angles it looks like Jaycee Chan and Ekin Cheng. But still, he is the first one out of TVB after the big stars to have one. That is a great achievement!

*Credits to mingpao, the-sun, and Louis Koo's blog
Posted by hyn5 at 5:24 PM No comments: 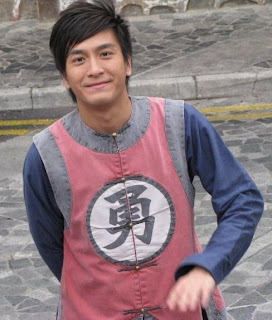 The cast of "Root of Evil" (excluding Nancy Sit because she is hospitalized) was filming on 山頂. Ma Ming, Sharon Chan, and Vincent Wong were wearing ancient army clothes because the scene was about them participating in a wedding carriage race. 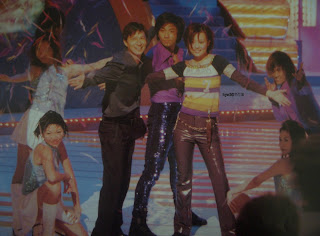 I bet the most hardcore Ron Ng fan wouldn't even have this picture of him as a dancer! Ha ha....

In 2000, Nick Cheung was signed under EEG as a newbie singer. He and Joey Yung were on one of TVB's variety shows as performers, and Ron was one of the dancers in their segment. From the end pose, it seemed as though Ron was an artiste and not a dancer. Why would he be standing in the middle? Ha ha....

A Blast from the Past: "Healing Hands" Costume Fitting 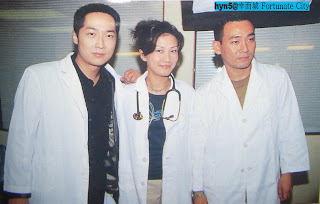 Steven Ma, Flora Chan, and Bowie Lam at the costume fitting of "Healing Hands". I guess Flora was supposed to be a doctor in part one. Tang Tak Hei must have changed his mind for the real filming of it.
Posted by hyn5 at 2:01 PM No comments: