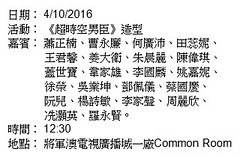 Personal Note: TVB hasn't had a series about travelling from ancient to modern since 2003's "The King of Yesterday and Tomorrow"!