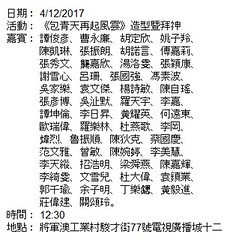 - 30 episodes long.
- In March, there will be location filming in Hengdian for over a month, and then Xinjiang for approximately ten days.
- The story is more modernized and lighthearted. There are eight cases.
- Shaun Tam will play Bao Zheng (包拯), the younger version of Justice Bao.
- Raymond Cho will play Gongsun Ce (公孫策). His portrayal will be more lighthearted.
- Nancy Wu will play Yun Qianyu (雲千羽), Kaifeng's first female lawyer who is well-versed in literary and martial skills. She falls in love with Shaun, while Raymond has a crush on her.
- Elaine Yiu will play Ji Niannian (紀念念), a girl from a different clan. She has two identities: one is a servant. Later, she becomes Kaifeng's coroner, helping Shaun investigate cases. Before she became a coroner, Nancy rescued her; they have a sisterly bond. She and Nancy will work together in investigating and solving cases. She and Shaun develop feelings for each other while investigating cases together, becoming his wife in the end.
- Grace Chan will play a foreign princess. She is the founder of a religion; she is a 90-year-old grandmother but has the body of a young girl.
- Owen Cheung will play Zhan Zhao (展昭).
- Jack Wu will play a villainous alchemist.
- Kelly Fu will play Tang Xiaochen (湯曉晨), a sumo wrestler who starts to wrestle because the brothel has a wrestling match in which the winner receives a million silver taels. She has three romantic storylines. She has a romantic storyline with Owen and Cheung Wing Hong.
- May Chan will play a wrestler.
- Sammi Cheung will play a wrestler.
- Hugo Wong will play Chen Shimei (陳世美).
- Katy Kung will play Qin Xianglian (秦香蓮), Hugo's wife. She will appear for five episodes.
- Cheung Wing Hong will play Zhao Zhen (趙禎).
- Susan Tse will play a miracle-working doctor.
- KK Cheung will play Nancy's father. He has a red face but a black heart.
- Carlo Ng will play a character with Dissociative Identity Disorder. He is in the 'Flower Butterfly' (花蝴蝶) case.
- Harriet Yeung will play Ruan Chusi (阮初四), Shaun's fiancée.
- Yoyo Chen will play Shui Linglong (水玲瓏), who seems to be the boss lady of a brothel on the surface; however, behind the scenes, she is actually a heroine or a spy. She has to fight.
- Bob Cheung will play Song Dongcheng (桑東城). Zoie Tam is his sister-in-law (i.e., the wife of his elder brother), but his elder brother has already passed away; Zoie was the one who brought him up.
- Zoie will take part in the 'Black Basin' (烏盆) case.
- Momo Wu will play Gaochang Princess Huochi Haer (火赤哈兒), who is in the first case.
- Oscar Li will play Wang Zhao (王朝), one of the four enforcers.
- Alan Tam will play Ma Han (馬漢), one of the four enforcers.
- Jonathan Lee will play Zhang Long (張龍), one of the four enforcers.
- Darren Wong will play Zhao Hu (趙虎), one of the four enforcers.
- Jimmy Au will play General Tie Feiyang (鐵飛揚).
- Ho Yuen Tung will play the son of Law Lok Lam and Candy Man.
- Aliya Fan will play Tie Hehua (鐵荷花), a brothel woman.
- Hebe Chan will play a brothel woman.
- Sophie Yip will play Lu Feicui (陸翡翠).
- Frankie Choi has a romance with Sammi, but he later dies.

Personal Note: Lighthearted? So, the series is a comedy?! o_O

Owen is styled more like that of a eunuch than Zhan Zhao.... o_O