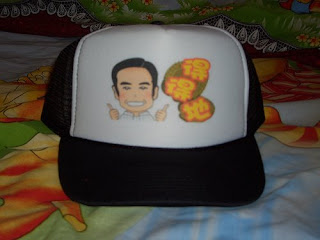 Everyone knew that Moses was going to win 'Best Actor' at last month's TVB Awards Presentation. So, in order to celebrate Moses' win that night, I decided to give him something that will give him memorial value. Since "Heart of Greed" was such a hit, I came up with the idea of having his 'Tak Tak Dei' cartoon imprinted on a trucker's hat.

I created the hat and had it shipped to me some time in November; however, I didn't receive the hat until the 11th of November. With that day being Remembrance Day, FedEx had to ship it out the next day. The awards night was on the 17th, so FedEx had 5 days to ship my parcel to HK. Wait, the parcel was delayed in the US for an extra day. So, I was down to 4 days!

Anyway, Moses ended up winning the awards for 'Best Actor' and 'My Favourite Male TV Character'. Yan from MC Hall later informed me that she received my parcel that Saturday afternoon. So, she was able to present Moses with my gift. She told him that the hat was from "Ivy in Canada". Apparently, when he saw the hat, he laughed very happily and said the hat was cute and adorable. Moses told Yan to say thank you to me for the great gift.

Anyway, no big deal because there will be more chances in the future!

*Thanks to Yan for the wonderful picture of Moses holding the hat!
Posted by hyn5 at 1:17 PM