ontv Clip
TVB's new trump card series "Forensic Heroes V" will start filming next month. It was originally arranged for Pakho Chau and Priscilla Wong to be the leads; however, Priscilla has been emotionally distressed recently due to a personal matter, and has been absent for a lot of promotions for her series and programmes. It seems that she has not been able to immerse herself in her work. As for Pakho, since the series is expected to film until Lunar New Year, and Voice Entertainment will hold a concert for him later, he, who just finished the filming for the series "Spectator", needs time to prepare for the performance. Plus, he wants to take more time out to accompany his newborn son; thus, his schedule has not worked out.

At the same time, it is known that "Forensic" will be collaborating with a Mainland agency. TVB has taken Mainland's recent reorganization of the entertainment industry and the enumeration of a number of new policies and restrictions into account, so everything is being done carefully. Thus, there has been a cast change. Now, the male and female leads have been reshuffled with Bosco Wong, Jacky Cai, Benjamin Yuen, Sisley Choi, Tony Hung, and Venus Wong set to star.

Tony Hung Growing a Beard to Play a Rogue Doctor

When interviewed, the series' producer, Fong Wang Cheuk (formerly named Fong Chun Wah), revealed that there are many cases in the series. Bosco and Jacky are playing forensic pathologists, Benjamin and Venus are playing cops, Tony is playing a doctor, while Sisley's role is special, as she will be connected to many characters.

Bosco, who has already not filmed for TVB for more than four years, was invited to film by Deputy General Manager Eric Tsang this time. He frankly said that he is greatly looking forward to it: "Happy! Have been away from TVB for quite a few years. The last series was already 'Heart and Greed'. I read ten-plus episodes of the script and already could not help but keep on reading it. Really felt pleased beyond my expectations". Mentioning that there are underwater scenes in the series, he said, "I also dive, but just have not gotten the license! There should be no problem!"

Jacky and Tony have a romantic storyline. She, who is busy wrapping up "ICAC Attack", expressed that she will prepare for the new series well: "Have also worked with this time's lineup before. It should be quite fun. (Playing a pair with Tony?) We have already known each other a long time ago, but it's the first time collaborating. He is very quick-witted. I think that his character this time is not too similar with the real him. It's the same for me, so greatly looking forward to it". Tony's character is exceptional this time, as he is playing a rogue doctor. He said, "I haven't done this before. There is no professional restriction, so there will be a lot more that can be done. Jacky and I are friends who are quite able to have great conversation. When put together, there should be chemistry very quickly". He also expressed that he will be growing a beard to match with the role's image".

Sisley and Benjamin are currently rushing to film "ICAC Investigators 2011"; later, the two series will be filming at the same time for a month. Sisley said, "The role is different from the professionals that are often done before. Hope that there is new room for something to do". Mentioning the frequent skin rashes she had before, has the condition already improved now? She said, "Have always been taking Chinese medicine to nurse my health, but there is still some unknown skin irritation a lot of the time. Very helpless. Hope that germs keep away from me soon".

Benjamin is playing an 'insomniac cop'. This time, he has the most scenes with Sisley. Asking what preparations he had before filming, he laughingly said, "Go on a diet! Eat lighter. (Is it your first time working with Bosco?) Filmed 'A Change of Heart' with him seven or eight years ago. Hope that we have sparks". 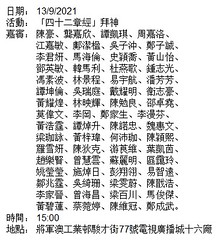 Personal Note: Finally, a series having a blessing ceremony before it actually films!

Ha ha.... Moses prohibited from mixing in English in his dialogue!

Surprised that Katy will be having a beard for the entire series....

Nice to hear that Chow Ka Lok is playing a different role this time around!

"The Kwoks and What" Opening Theme Video & End Credits

"The Kwoks and What" Opening Theme Video

"From the Beginning" - Joey Law

"The Kwoks and What" End Credits

"The Kwoks and What" Theme Song (Full Version) & Sub Song

"The Kwoks and What" Theme Song (Full Version)

"The Kwoks and What" Theme Song MV


"From the Beginning" - Joey Law

"The Kwoks and What" Sub Song

"The Outside World" - Fred Cheng

Has a September Birthday with Ron Ng, Nancy Wu: 'He Gave Himself the Best Birthday Gift'

Nancy and Ron have recently been collaborating on a new series. Nancy laughingly said that she should have congratulated Ron, but when she knew about the rumour that day, she had already gotten off work; otherwise, she would have congratulated him on the spot. Ron, who heard this while standing not too far away, interjected, "That day, Bosco [Wong] was sitting right across from me, and also asked me how he should respond. I told him to freestyle". She took the opportunity to ask Ron if he was no longer single; Ron could not bother with it anymore and left with a grin.

Nancy continued, "We have known each other for such a long time. Are brothers, so I don't mean to kick him when he's down, but also hope that he meets the love in his heart soon! Ron and I both have September birthdays...also cut a birthday cake together when we were working". Ron was teased for already having 'tagged HANA' as a birthday gift. Nancy laughingly said, "He gave himself the best birthday gift". Once Nancy learned that Ron mistakenly thought that a tag was equivalent to notifying her that he had already followed her, she immediately teased him, saying, "Oh! He doesn't know to use the social platform". Then she said that he had not followed her yet, and it turned into Joel and a group of friends causing a commotion about having not yet been followed by Ron!

Nancy also took the opportunity to ask Oscar for some work, pointing out Oscar's continuous development in business other than his performing arts career, even planning to invest in a production company and telling him to count her in as the 'first female lead', and relying on him for income for the second half of her life. Oscar responded, "Forever the first female lead!" Apart from wishing for his business to grow bigger and become more successful, Nancy laughingly said that she also wants to become a shareholder in his production company and be the boss lady. She has been in the industry for almost 20 years; while being an actor, she hopes to be able to have new excitement and pursuits, and revealed that she is interested in creating some works. She wants to shoot female-oriented scripts because she has filmed mostly male-oriented series in the past. She just turned 40 (years old); she also hopes to face social problems from the perspective of females of the times.

*Credits to stheadline, tvb, on.cc, bastilleent, moreforms, and youku
Posted by hyn5 at 12:00 PM No comments:

The Making of "The Line Watchers"

*Credits to TVBent
Posted by hyn5 at 6:00 AM No comments: